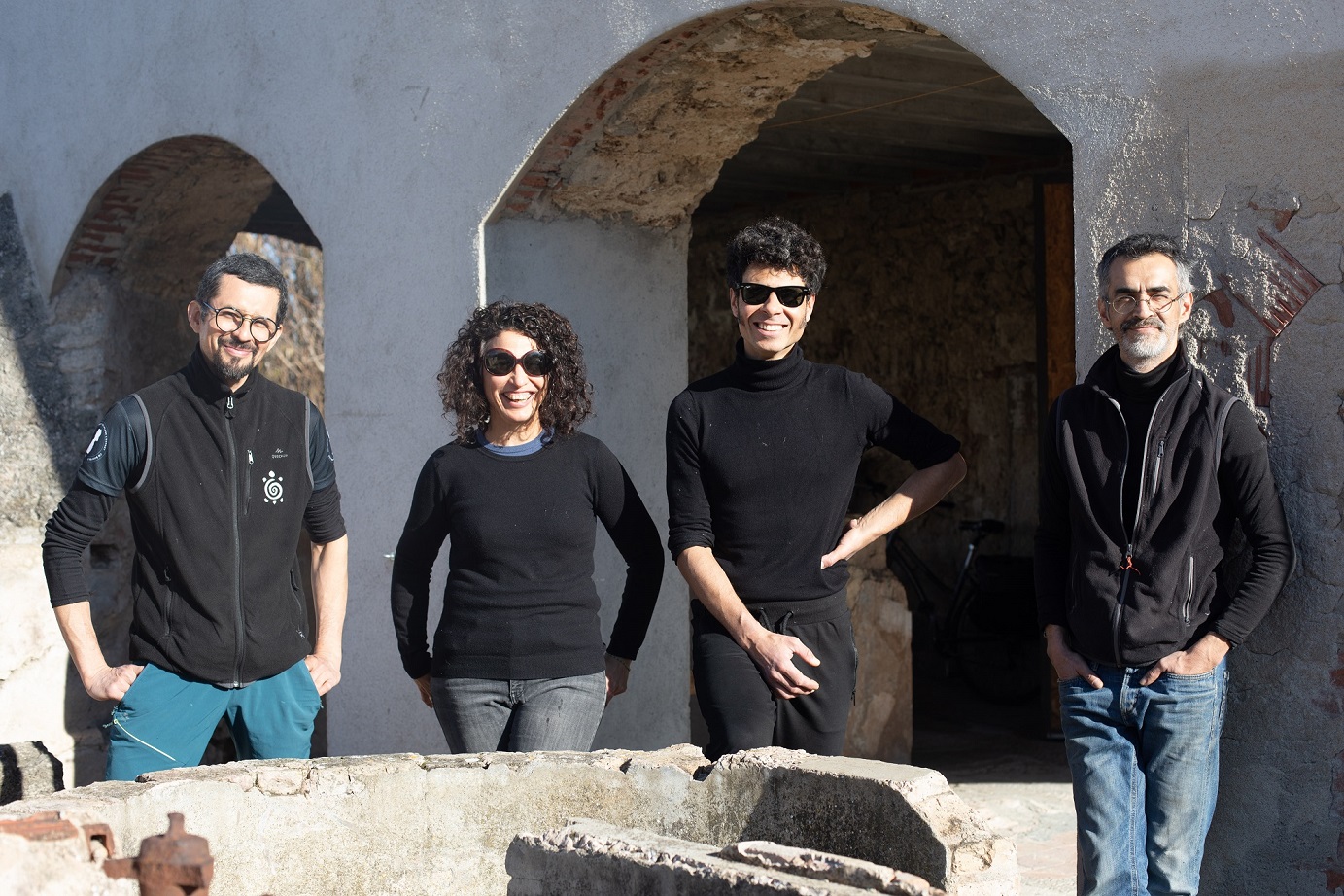 Sastres Paperers, SC ("paper tailors" in catalan) is a small company created in 2014, but with 30 years of experience in the manufacture of handmade paper behind us. You can found us at  Molí de la Farga (Banyoles), a traditional paper mill located in a public building that is over 335 years old. Our project has cultural and social applications and is based around this points:

2. Promoting the craft via organization of courses and workshops for groups and activities for schools and receiving visits to our mill. Everybody interested in the paper world or in the traditional handmade broadcast at Pla de l'Estany is welcome.

3. The training in the profession of people with disabilities through collaboration with several specialized centers of the county such COiET (Centre Ocupacional i Especial de Treball).

The people (From left to right):

Jordi Torrent (1976): Papermaking craftsman from 2008 when he began to work with Toni. He and Toni Sardà founded Sastres Paperers SC company.

And in the black and white photo it also appears:

Toni Sardà (1958): Master craftsman given by la Comissió d'Artesania de la Generalitat de Catalunya. Manager of Aquari Paper Mill (1983-2013), the company origin of our project. Nowadays, Aquari Paper is the name of the brand of our papers. He is currently retired, although he occasionally collaborates with the company.

AQUARI PAPER (origin of the brand and the project)

In 1981 Toni Sardà met the chinese painter Dai Bi Hin in Llers (Alt Empordà). This men awakes in Toni the desire to produce handmade paper and he wents to Capellades where he remains for a few weeks learning the basis of the papermaking craftsman. He spended the next two years looking for machinery, raw materials and for the craftsman training.Then, in 1983, he founded in Crespià the Aquari Paper Mill. He started with a hollander beater (the machine used to mill raw material) solded by Frederic Amat painter, an oil press coming from a cooperative and shapes (the mould which we use to make the paper) himself built.

Few weeks after the beginnig, he had an order that beat the odds: Tristan Barbarà renowned publisher, ordered him to make a big format artist book with J.V. Foix texts and Antoni Tàpies engravings. It was so successful that the following years Tristan Barbarà and Antoni Tàpies ordered him many works of graphic art. This fact invited other graphic publishers and artists to recognise the Aquari Paper Mill and the demand on handmadepaper began to grow. Immediately, he moved to Banyoles where he could explore new possibilities. In this 30 travel years, the Aquari mill worked for graphic publisher studios and all sorts of artits (Antoni Tàpies, Manolo Valdés, Joan-Pere Viladecans, Miquel Barceló, Jaume Plensa, Jorge Oteiza, Víctor Mira, J.M. Riera i Aragó, Patrick Loste, Lluís Vilà, etc. ) and also for specialised stores all over the world (BarnaPaper, Schleiper a Bèlgica, Sennelier a París) and museums as Van Gogh Museum d’Amsterdam.

In recognition of his trajectory, Toni Sardà was honoured in 2009 as Master craftsman given by la Comissió d'Artesania de la Generalitat de Catalunya, by conseller d’Innovació, Universitats i Empresa.

Everybody knows that when one history ends, another one begins: this one from Sastres Paperers SC, the businnes that, just one year after, in 2014, foundes Toni Sardà and Jordi Torrent (the last worker at Aquari mill). Mamen Cagigós incorporates to the businnes also in 2014. The second paper round begins! 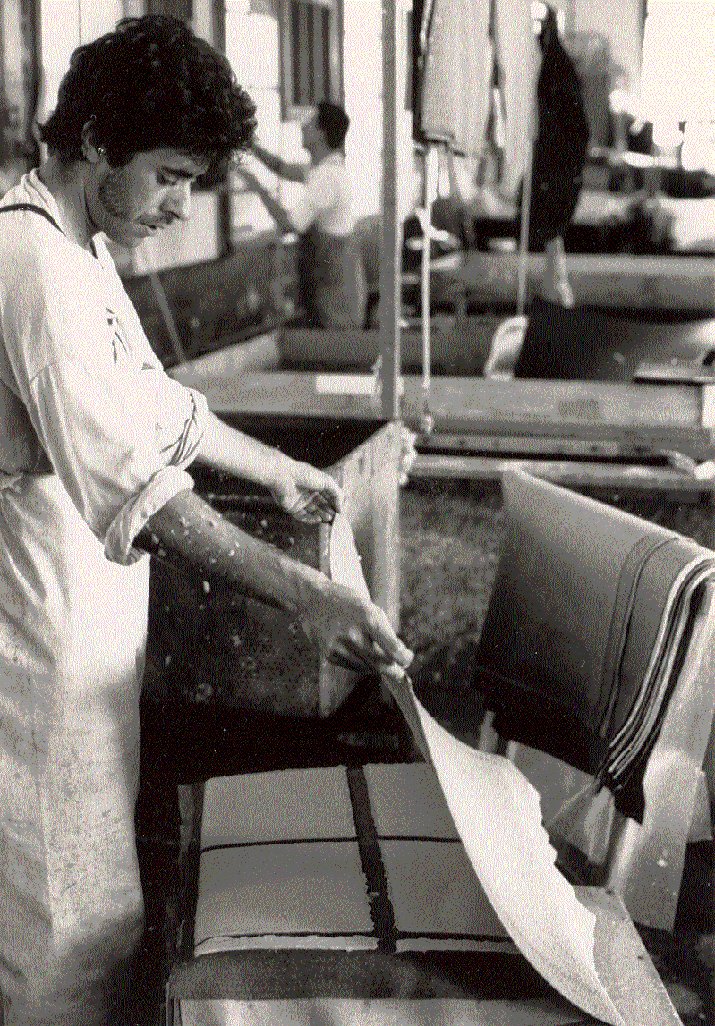 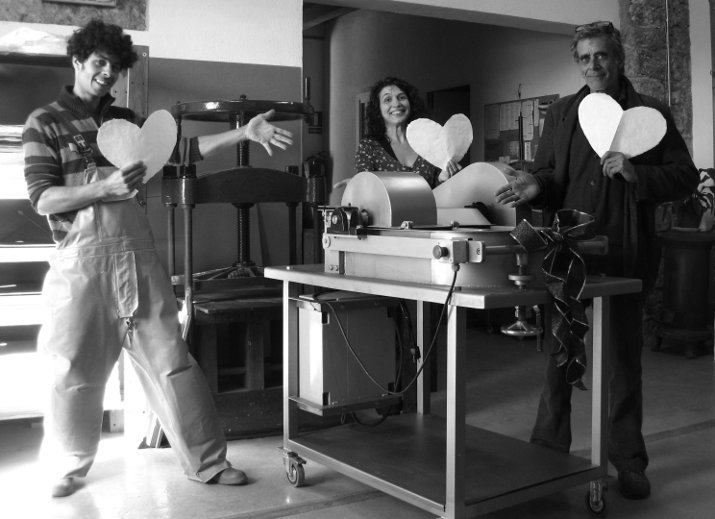